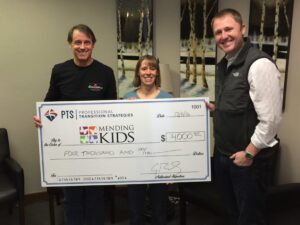 By serving the medical community, we at Professional Transition Strategies (PTS) understand the value doctors and dentists provide to their communities. When we decided to become a social impact company, we considered multiple charities to align ourselves with. Ultimately, we chose Mending Kids.

“The vibrant history of Mending Kids began in the mid-’80s when the adopted daughter of founder Cris Embleton passed away just prior to her first birthday, when $5 of medicine would have saved her life. Cris set out to make sure other families wouldn’t suffer as hers had and that children around the world would have access to life-saving surgeries and medical care,” Mending Kids said.

Mending Kids was created out of an organization called Healing the Children. This international nonprofit continues to operate in 14 states. In 2006, the local California Board of Directors broke away and formed Mending Kids (International). In 2016 alone, Mending Kids deployed 27 missions to 15 countries, where 550 children were treated and 673 surgical procedures were performed, a number of which were in the United States.

Since its creation, Mending Kids has provided surgical procedures to more than 2,600 children in 57 countries. Mending Kids was also featured on the “Anderson Cooper Show,” CNN and “Good Day LA,” as well as in the “Los Angeles Times,” “People Magazine” and countless other media outlets. 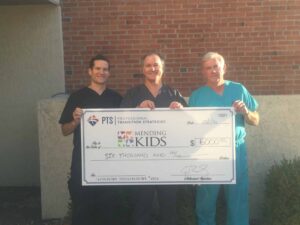 Being a medical transition company, we think it makes the most sense if we are involved in a charity that focuses on medicine, children and the less fortunate, as well as has the ability to change one’s life for the better. We also chose Mending Kids based on the fact that we are all parents and passionate about children’s health.

What is fairly unique about Mending Kids is that they accept not only monetary donations, but also supplies, such as diapers, crayons, toys and clothes. The organization also allows doctors to donate their time to travel and perform life-saving surgeries to those in need. In addition to performing the surgeries, they also train local doctors through partnerships and resource sharing. This gives doctors knowledge for the future.

There is no foreseeable end to our involvement with Mending Kids. We feel that giving back to this organization is one of the most important things we do.

You can learn more about our involvement with Mending Kids here.